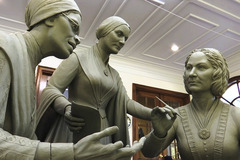 For the News Discussion, the article that I choose is Three Monmentual Women from Achieve. It talks about how Central Park in New York has many statues in it. But, there are no statues of real women. This is about to change because in August 2020 there was a new statue was unveiled. It was a statue of three powerful women in history that are sitting at a table altogether. They are Susan B. Anthony, Elizabeth Cady Stanton, and Sojourner Truth. They all helped in the movements of women’s suffrage, women’s civil rights, and the abolition of slavery. They helped take huge steps in these movements.